The galactic winds created by stellar explosions allow galaxies to receive and exchange matter with their external environment. A research team, led by the CNRS and l’Université Claude Bernard Lyon on the French side, has created the first map of a galactic wind using the MUSE instrument at the Very Large Telescope at the ESO. It revealed how some of the universe’s missing matter might be found and revealed the formation of a nebula around a galaxy, according to a study published in MNRAS on September 16, 2021.

The heart of galaxies is ordinary or baryonic matter, which is comprised of the elements listed on the periodic table, as well as dark matter, which has yet to be discovered. Around 80% of the baryons in galaxies that make up their normal matter are missing, and this is a major problem when trying to understand their formation. The galactic winds caused by stellar explosions expelled them from galaxies into intergalactic space, according to models.

Scientists from the French National Center for Research and Development (CNRS) and Université Claude Bernard Lyon successfully used a MUSE instrument to model the galactic winds driving the exchanges between a young galaxy and its nebula (cloud of gas and dust).

In selecting Gal1, the team took advantage of the proximity of a quasar, which was a “lighthouse” for guiding them to the study area. Initially, their goal was to observe a nebula around this galaxy, although its luminosity was not known, thus making this observation uncertain.

As a result of the perfect placement of quasars and galaxies, as well as gas exchange due to galactic winds, a unique map of the universe could be created. The galaxies enabled the discovery of a nebula that is emitting and absorbing magnesium simultaneously as it is forming in the universe.

While normal matter nebula have been observed in the near universe, their existence during the formation of young galaxies is only suspected.

The discovery of a few of the Universe’s missing baryons confirms the fact that 80–90% of normal matter is not found within galaxies, which should assist in expanding models for the evolution of galaxies. 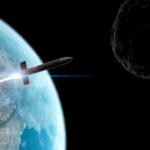 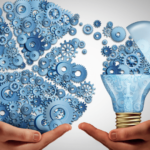