Cryptocurrencies are yet to be adopted by the main e-commerce platforms. Almost none of them accept digital currency as payment.

But it’s reasonable to say that whoever is the first to do so will become a talking point in the cryptosphere.

EBay (EBAY) – Get eBay Inc. Report, which aspires to be the marketplace for Gen-Z and millennials, is looking into the potential of accepting cryptocurrency as a payment method. According to CEO Jamie Iannone, the company could make an announcement on March 10 during its investor day.

“We’re just completing our transition to manage payments where we’re now managing $85 billion of volume on our platform directly,” Iannone told TheStreet. “This gives us the ability to open up new forms of payment.”

“We opened up Google Pay and Apple Pay. We have a partnership with Afterpay in Australia, which is a platform that appeals to Gen Z, and that is a buy now pay later platform on the marketplace,” Iannone continued.

Iannone insists that Generation Z is a top focus for his platform. He discusses the various measures launched by eBay, for example, to attract this generation of today’s and tomorrow’s consumers. eBay is concentrating on deals involving sneakers, which is one of its fastest-growing categories.

“We’re appealing to the younger generation with shoes,” Iannone stated, “where they’re coming in selling their sneakers, becoming a collectible collector on the platform, and establishing new marketing opportunities.”

Is this to imply that eBay will accept digital currencies like bitcoin and ethereum as payment methods? TheStreet inquired once again.

“We’re not accepting crypto currently,” Iannone replied. But “on March 10, we’re going to go deeper on all of these things, payments, advertising, our focus categories.”

He also noted that transactions involving non-fungible tokens (NFTs) were taking place on eBay despite the fact that the firm had made no specific disclosure.

“So even without announcing anything or doing anything, people started trading NFT on a platform,” Iannone continued. “It reminded me of many years ago when people just started selling cars when we didn’t even have a vehicle business at that point. So we’re seeing the same type of thing [with NFT].”

And, last, he stated: “eBay will be the marketplace for people to exchange products, both physical and digital. So, in the long run, we want this to be the sustainable marketplace.”

NFTs are blockchain-based deeds of ownership for a variety of digital assets, ranging from high-end ape paintings to collectibles such as celebrity signatures. They can even represent certificates for tangible things in specific circumstances.

According to blockchain analytics firm DappRadar, the NFT marketplace boomed in 2021, generating over $23 billion in trading activity. This was an increase over the previous year’s figure of less than $100 million. 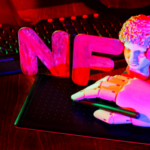