In one of the world’s most severe crackdowns, China’s authorities prohibited cryptocurrency trade and mining last year. Other uses of blockchain technology and non-fungible tokens (NFTs) are being pursued by China’s government, as long as the technology remains under their control.

The Blockchain Services Network, a Chinese state-backed blockchain corporation, wants to launch infrastructure this month that would allow Chinese citizens and businesses to create, sell, and acquire NFTs.

According to the South China Morning Post, He Yifan, CEO of Red Date Technology, a firm that provides technical support to BSN, NFTs “have no legal difficulties in China” as long as they are not linked to cryptocurrencies like Bitcoin, which are banned in China.

He further said that China prohibits all public blockchains, such as Ethereum, which is used to promote and track NFT transactions. Instead, the BSN network will rely on customised Ethereum blockchains and nine other platforms to suit Chinese regulatory standards, such as requiring all users to verify their identities and allowing the government to intervene if “illegal actions” occur.

BSN will also only accept Chinese yuan as payment for NFTs, rather than the cryptocurrencies typically used to trade NFTs outside of China.

China’s NFT sector has appeared to operate in a legal grey area until now.

Alibaba, the Chinese e-commerce behemoth, released a collection of 16,000 NFT artworks in June, which sold out in minutes using its Alipay mobile payments programme. It was important to distinguish between NFTs and cryptocurrencies at the time.

At the time, a representative for AntChain, Alibaba’s blockchain subsidiary, noted that a “NFT is not convertible, nor divisible, making it different by nature from cryptocurrencies such as Bitcoin.”

In the months that followed, Alibaba, along with other tech giants such as Tencent, Bilibili, and JD.com, renamed NFT offerings as “digital collectibles,” a move that experts saw as an attempt to dodge regulatory attention.

China’s government showed signs of warming to NFTs in December, when state-run news agency Xinhua launched its own NFT collection.

Despite this, China’s leading tech companies have been unable to capitalise on the growing interest in NFTs. Companies in China are prohibited from profiting from NFT sales, and users who purchase them are now unable to resell them.

According to He, BSN will address at least one of the primary issues with Chinese NFTs: they are now hosted by private firms that do not communicate. He claims that BSN will operate in China across numerous chains to become the country’s largest NFT marketplace.

“In the future, China’s yearly output of NFTs will be in the billions,” he told the SCMP. 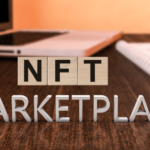